The precision cleaning benefits that you will enjoy with this system include:

The electrical control cabinet (approximately 49″W x 72″W x 16″D) is skid mounted with the main system and is located outside the Class 1, Division 2 area (3 feet from the main system). Custom-sized dryers can be provided to meet application-specific requirements. 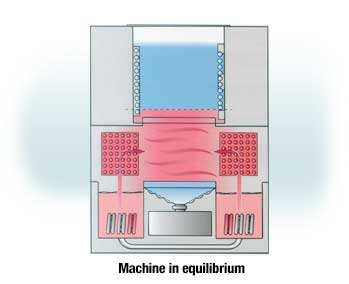 When not processing a load, the system operates with only the two main primary heating coils active, vigorously boiling IPA in dual off-set boil sumps. IPA vapors are super-heated to 105ºC as they pass through superheat heat exchangers positioned above each boil tank. 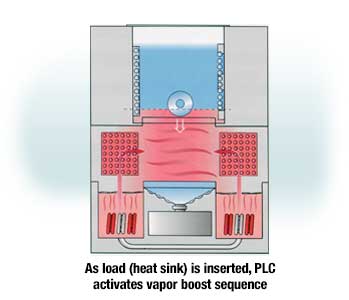 As the incoming process load (effectively acting as a heat sink) is inserted into machine, a secondary pair of “vapor boost” heating coils is activated by the PLC. This vapor boost action offsets the effects of “work shock” as the incoming load absorbs heat and condenses vapors. The vapor booster effect prevents vapor zone collapse, and allows sustained and vigorous IPA condensation rinsing of the inserted load. As incoming load descends through the condensation cooling coils, horizontally-sliding process tank lids close above the load, to minimize vapor emissions and vapor zone disturbances.

As condensed IPA streams off the parts, falling condensate strikes a sloped collection surface, which is backed by a temperature-controlled water jacket. By keeping the condensate collection surface cooled below the boiling point of the azeotropic IPA/water mixture, the system minimizes ref lashing of water-rich azeotrope back into vapor, thus preserving process integrity. 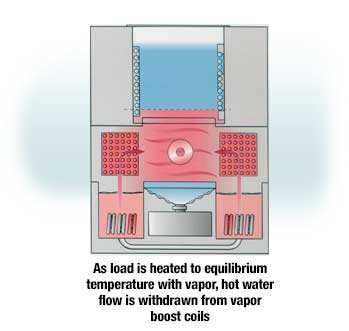 Once the inserted parts load has reached equilibrium temperature with the surrounding vapor, condensation ceases. the vapor boost heating coils are deactivated, and heat balance within the system is returned to equilibrium.

The parts load and fixtures may be superheated by the surrounding vapors, as selected by the customer, to speed drying and minimize solvent drag-out.

The load is then raised above vapor zone using a movement profile designed to minimize the “chimney effect,” and halted briefly in the cooling coil region to allow entrained solvent vapors to dissipate.

Horizontally-activated tank lids are then opened, and the load is automatically raised to the upper “home” position for unloading.

If your parts or throughputs do not meet our standard tank sizes, contact a nearby Crest representative today.

We have custom manufacturing plants in the U.S. and overseas that can help you meet your custom ultrasonic cleaning equipment needs. 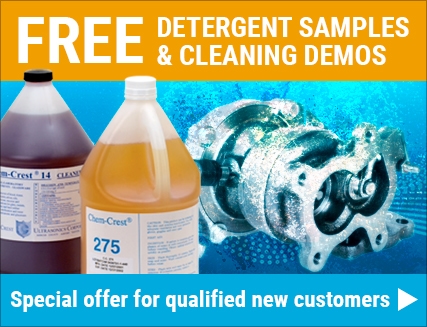